A company called SpinLaunch has developed a new system for sending satellites and other heavy payloads into space. The engineers at this U.S-based startup designed and built a gigantic outdoor accelerator that functions essentially like a slingshot. The accelerator is so potent and powerful that it will be able to propel a satellite into low-earth orbit at a height of 25,000 feet (7,620 m) or more above the planet’s surface, without the assistance of a rocket or any other type of fuel-burning lifting device.

The SpinLaunch accelerator has just successfully completed its tenth test, and so far it has not experienced any mechanical breakdowns or malfunctions. The accelerator has not yet been used to hurl an actual working satellite into orbit, but the company expects to begin launching real satellites for commercial clients by 2025 or 2026.

As of now NASA relies exclusively on chemical-powered rockets to launch its satellites and spacecraft into orbit. But rockets are expensive to build and launch, can’t be reused, and have a tendency to explode in the air or on the launch pad from time to time. In contrast, the SpinLaunch accelerator can be used over and over again, and there is no danger of a fiery and disastrous malfunction. This technology should be quite attractive to NASA, which has budgetary limitations that require them to be innovative and opportunistic as they seek ways to reduce costs.

A view of Flight Test 10 of the SpinLaunch technology designed to send satellites and other heavy payloads into space. The Flight Test Vehicle is visible above the suborbital accelerator. ( SpinLaunch)

The Test Results Are in: Success for the Satellite Accelerator

During the latest test launch, which took place on September 27, the accelerator sent payloads provided by NASA, Airbus, Cornell University, and the satellite delivery company known as Outpost into orbit. This was not the typical test, however, as some of these payloads included sensitive electronic equipment. The purpose of this test was to see if such equipment could survive the severe gravitational forces generated by the accelerator, and in fact the equipment did emerge from the experience unscathed, just as everyone had hoped.

In among NASA’s payload was a sophisticated Data Acquisition Unit (DAQ), featuring multiple types of sensors used to measure pressure, temperature, humidity, and other variables that could affect the health and structural integrity of satellites or other objects sent into space.

Since the SpinLaunch system is so new, NASA wanted to evaluate its performance in order to determine the true viability of the space-accelerator technology. Happily, the DAQ survived reentry and landing without suffering any damage. Now NASA researchers will be checking the data it collected during its roundtrip flight into orbit and back to see if any red flags are detected.

With 10 tests of their groundbreaking technology now having been completed without incident, SpinLaunch is anticipating heavy demand for their services in the coming months and years. “Flight Test 10 represents a key inflection point for SpinLaunch, as we’ve opened the Suborbital Accelerator system externally for our customers, strategic partners, and research groups,” Jonathan Yaney, the SpinLaunch founder and CEO, said in a statement released by the company.

“The data and insights collected from flight tests will be invaluable for both SpinLaunch, as we further the development of the Orbital Launch system, and for our customers who are looking to us to provide them with low-cost, high-cadence, sustainable access to space,” concluded Yaney. 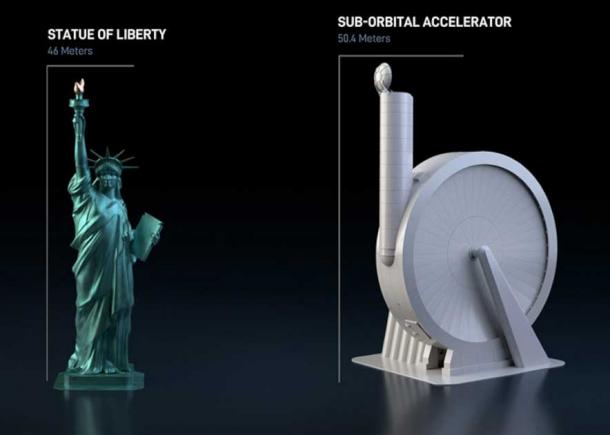 Graphic depicting the size difference between the Statue of Liberty and the SpinLaunch accelerator, designed to propel a satellite into low-earth orbit much like a slingshot. (SpinLaunch)

The SpinLaunch suborbital accelerator represents an extraordinary triumph of technological ingenuity. It is located in the Jornada del Muerto Desert of New Mexico , very near the launch site used by Virgin Galactic, the private spaceflight company formed by Richard Branson.

This powerful machine functions under the same essential principles as a particle accelerator . But instead of applying its force to speed up the movements of atomic and subatomic particles, it will be used to accelerate and then launch 440-pound (200 kg) satellites straight up into near-Earth orbit. Initial tests have launched objects as high as 25,000 feet (7,620 m) above the planet’s surface. However, SpinLaunch estimates that its accelerator could eventually be equipped to send objects 200,000 feet (61,000 m) out into space, which is the equivalent of 37 miles (60 km).

It takes a massive and powerful piece of equipment to achieve such a feat, and the SpinLaunch accelerator certainly meets the requirements. The disc-shaped mega-machine is slightly taller than the Statue of Liberty, reaching a height of 39 feet (12 m).

It is powered by a specially-engineered electric drive that spins a large rotating arm or centrifuge at speeds up to 5,000 miles (8,000 km) per hour, accelerating the objects inside until they reach that velocity. After they’re up to speed, payloads are released by an accelerator launch cannon that shoots them straight up into the sky, at speeds that guarantee they will disappear from view in a brief moment of time.

As might be expected, the G-force (gravitational force equivalent) generated in the accelerator is extremely high. Rockets subject astronauts to a G-force of up to 3, making them feel as if they weighed three times as much as they actually do (a G-force of 9 is considered the maximum the human body can manage). In contrast, objects expelled from the end of the SpinLaunch accelerator will be subjected to a G-force of several thousand, and in the latest test the payloads were exposed to a G-force of 10,000.

The SpinLaunch accelerator should be attractive to private space companies and the US government alike. In comparison to rocket technology it offers costs savings and improved reliability and safety. While it could never be used to put human beings in space, the accelerator could conceivably be used to launch a wide range of objects and materials out of the Earth’s atmosphere.

This could include construction materials for space stations or for manufacturing facilities located in space, in addition to satellites or unmanned craft destined for the Moon, Mars, or other locations in the solar system . Based on the successes already achieve it would appear that the sky is limit for this unique space technology, both figuratively and literally.